The Grooby Girls 2016 Calendar Is Here : Profits to go to TAIF.org

The much anticipated, highly awaiting, Grooby Girls Calendar for 2016 is our now. We’ve brought it out earlier to enable us to get it out to people in time, and so they can enjoy months of cover girl Jessy Dubai on the wall before even having to turn the page. I’m very proud of this calendar and hand-picked every shot personally (more on that later). We’ve made it a little smaller, so it can fit inside a standard USPS envelope and we can offer it for a special price withshipping included in the US and for a much cheaper price elsewhere.
It’s a lovely item, with great quality printing and photos and would be an awesome gift or decoration for your office.

Last year, when we released it, we of course got a bunch of emails asking why specific models weren’t included so I thought I’d share with you the process. A bunch of Grooby staff, who are involved in marketing as well as photographers are asked to submit which shoots or individual images they think would work. It’s not enough just having an awesome model, it’s about having the right shot of that awesome model which ideally is : photographed straight on, model looking fabulous, great lighting and background, a model who has appeared in the last 12 months and something which exemplifies beauty and sexiness. Many of photographers produce awesome scenes and photos which exude sex and erotica. Radius Dark has produced some of the best content we’ve ever had, yet there wasn’t an appropriate shot of his that we could find. Damazo shoots all the awesome Brazilians, yet among them all, there wasn’t the one shot. Buddy Wood shoots some of our most talked about and respected content (although he would state he’s more of a videographer) and unlike last year, he managed to squeak in with a fabulous shot of Foxxy. So what we have are five Blackula shots (6 including the cover), two from Kila Kali, one from Jack Flash, Frank, Omar Wax, Hiro and Buddy Wood. 13 gorgeous models selected from 100’s – and 13 perfect photos selected from 10,000’s

Everyone has an opinion and a choice like this could only be subjective, so this is my personal choice, not necessarily of the best photos or models of the year, but of the ones which were perfect for this calendar.

Proceeds from the sale of this calendar will be going to Trans Erotica Industry Foundation to support life saving/affirming trans orientated organizations.
You can buy the calendar directly from The Grooby Store 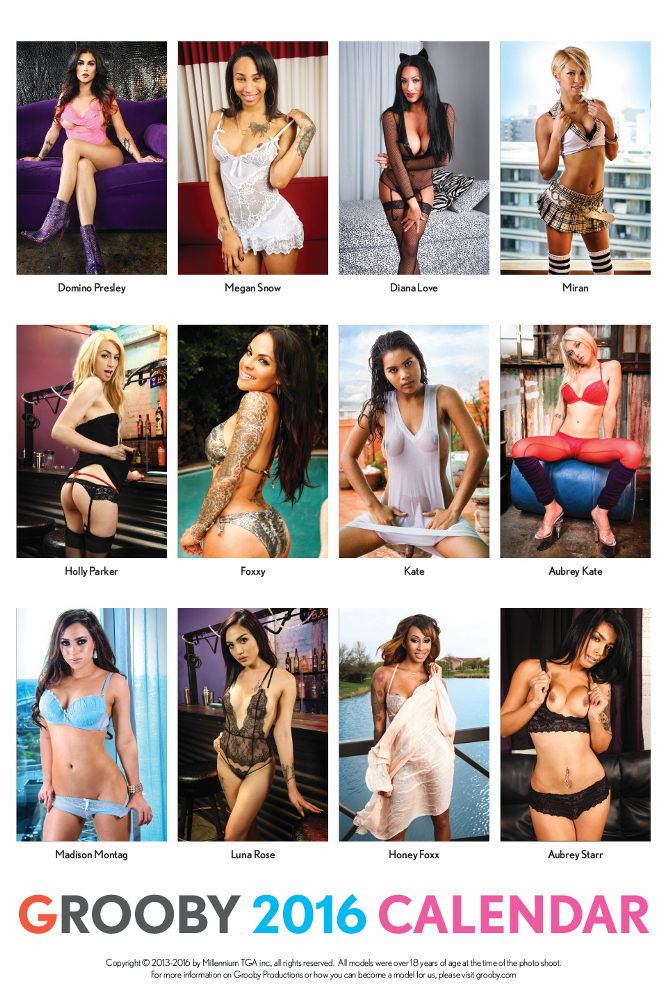