It’s that time of the year again … when Kristel starts popping chocolate, when Morgan stretches her legs and when the Grooby team start prepare for the biggest nights of the Transgender Erotica Industry’s year.   It’s not until March – but we start in late Sept.

We will be continuing to use the fantastic space at Avalon for the show, with the former after-party (now the pre-party – read below) being in Bardot.   The TEAcon will be at the Avalon also.

In previous years, we’ve always ran the award show on the Sunday night, with the after party on the Monday night.  This started when we used to do the show over President’s Day weekend and many had the Monday off.   Saturday nights are much more expensive to rent a space, and we’d find it difficult to meet those budgets.  Last year we moved the show to March, which pleased many but this meant people attending the Sunday and the Monday, had to take 2 days off work, if they were traveling.

So, we’re adapting again and happy to announce the new schedule for 2017.  We’re moving the ‘party’ to a pre-party on the Friday night.  Friday night is usually the party night of the week, and people can travel in for the event and make it.   Saturday afternoon will be TEAcon and although we have nothing planned for the Sat. night we have an idea that you won’t be short of things to do.  Sunday night will be the awards.

Fri March 3rd – The TEA Show Pre-Party at Bardot. MUST BE THERE!!! This will be the party event of the year.  More TS models then ever appear in one place.  The superstars and the starlets.  Do not miss this.

Sat March 4th – The TEAcon – and informal afternoon meeting the models, some talks about trans or the industry, things for sale, freebies, photo opportunities and more.

Sun March 5th – The TEA Awards at Avalon.  The most star studded night of the year.  All the girls are glamorous and the boys smart.  Entertainment and fun – and see who has win.  This is the best ‘put-on’ award show of the year.
Tickets are on sale NOW. We’re offering advance tickets for all-access 3-day event at a discount if you buy now. These will be going up. $60 gets you access to both the party, the TEAcon and the Awards Show. You can buy your tickets from : The TEA Show Ticket Pre-sale – but get in fast!

We also have a number of VIP seating at the show available. This is sponsor table seating and only available to be bought in advance and in very limited numbers. 10 seater tables are available at $1400 and include access to all events, speedy access on the awards night and your own table. We may have smaller tables available – Email kristel@grooby.com to get more information. 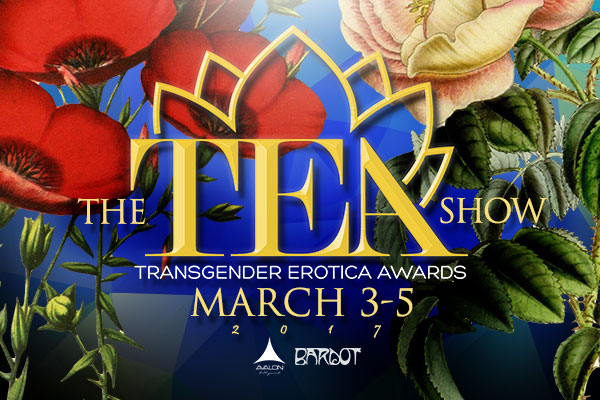